My husband was going to be out of town for a week so, planning ahead, I picked up about 20 horror movies from the library. I had a vision. 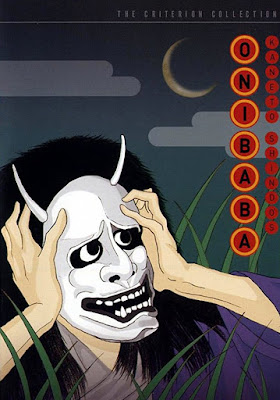 This is a mesmerizing and emotionally haunting film where a mother and her daughter-in-law try to survive (physically, mentally, and emotional) during a civil war-torn Japan. Living in crippling poverty and starving, they take to some desperate measures to survive.

And then there's this mask....

I saw one reviewer on IMDB call this film 'poetry', and I agree. It takes a very talented hand to turn the reeds and grass surrounding the womens' hut into such a unique realm for horror. A knot in your throat kind of horror.

It's also takes talent to relay, despite the story's full embrace of *desperation*, how lusty this film is. Vigorous, sensual, vivid - wild.

This is a beautiful film, poetic, jarring, and chilling.

Although it moves quickly, this film requires your full attention and patience. Watch in a dark, silent place with no interruptions and preferably alone. Pairs with water.

On a closing note, I can't help but feel there is social commentary tucked away here, buried deep beneath the dirt floor these women sleep on. I honestly can't put my finger on it but my bones tell me it's on age and aging women in particular. Seeing as the literal translation of the title is Demon Hag (according to IMDB) - and I didn't know that before I saw the film - I was surprised by how much I ended up thinking about the mother, and the real life horrors she would face if she didn't have her daughter-in-law there...

I rented this movie from my local library. Use the Find It. Watch It. links on Horror Habit's side bar to locate where else you can see this bone-chilling moral horror tale.

Now back to more films!

I've been on an '80s movie kick lately. I could blame my recent, first time introduction to Die Heard last month but that wouldn't be entirely true.

Now, although I've just seen Die Hard and Lethal Weapon (with RoboCop coming up on the viewing schedule), I've considered myself pretty familiar with 1980's horror films at least...

So you can imagine I looked like I had just seen a ghost (aaaaaaaaahhhhhhh, so BAD) when I stumbled across the *unknown* classic: 1986's The Wraith. 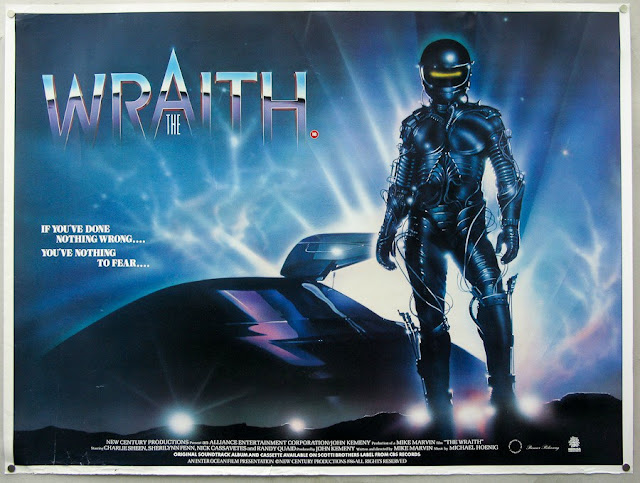 Soak this bad ass poster image in for a minute. Slather your eyes with it. And now, gather around fans of the High Plains Drifter because do I have a story for you! Tell me if you've heard this one before:


A stranger drifts into a small town and challenges the local bullies - To The Death!

Keep your High Plains Drifter wild west stories at home for The Wraith, however (although it does take place in the rural, dusty west). Never mind that pack of bad boys in Drifter who steal and torment the locals (okay, well, that's exactly what happens here too...). Leave the ghost stories to the campfire - wait, forget it. This story IS the High Plains Drifter but now in the 1980's instead of the 1880's and super decked out cars are involved.

In all, this is a fun, fun film. Fun in the only way 1980's action/adventure/horror can be: with crazy explosions, car chases, absurd realities, quirky character's, and gut-chuckling groan-worthy dialog. This little interaction being one of my favorites:


And oh yes, who can forget:


Staring Charlie Sheen, Sherilyn Fenn, Randy Quaid, and Nick Cassavetes, this is movie night gold. Get that popcorn ready (piping hot and covered in butter), greasy burgers will do too. Grab a six pack, some friends (or watch alone - it's fun ride alone too), and prepare for a film to satisfy that question: "I'm in the mood for an '80s horror film but I don't know what...".

I watched this one on Shudder, but if you don't have a subscription, it looks like it's currently available on Tubi TV for free. Or, use the Find It! Watch It! links on Horror Habit's side back to locate where else you can find this pre-tiger blood gem.

Posted by Horror Habit at 6:17 PM No comments: