It should come as no surprise to anyone, but Alex Bakshaev has done it again!

I was first introduced to Alex and his work by way of his still stunning 2015 film, The Devil of Kreuzberg.

Also, much to my complete delight, he played Inspektor Lang in the very definition of if a moving painting was a short horror film, Tlmea (2016) - a short that happens to be directed by Kevin Kopacka. The same Kevin Kopacka who stars in Alex's latest film: S & M: Les Sadiques. My heart is made happy by the coordination of such talents. 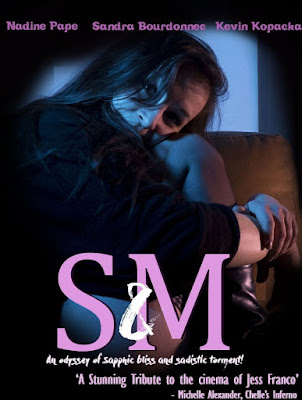 This Lynchian art house thriller is not a friendly one. From the brilliant backdrop of the cold, wintery, nearly almost always night setting in bustling Berlin, to the standoffish (nearly heartless) interactions of all the characters, viewers may need a hug afterwards.

My first thought on the film was that it felt like a coming of age nightmare. The dreamy atmosphere felt as if someone was recalling a really traumatic period in their life when just starting out in the world. A period in almost everyone's life that is already uncertain, sometimes frightening, and - based on some life choices or equally unfortunate luck - is fraught with peril.

The story opens with a young woman who has run away and is looking for a safe place to spend the night and from there our young Marie unexpectedly finds herself under the wing of the lovely Sandra (from The Devil of Kreuzberg fame), who offers support and shelter. The women become close, very close, and then life happens and their worlds spiral into a hell neither saw coming.

There are several tales interwoven throughout the film. Tales of suspicion, jealously, intimidation, power, and deception. All these whispering stories build up together to form a massive tower that points directly at This Is Not Going To End Well.

As I said earlier, this is a dreamy film - not dissimilar from someone recalling a life they wish to forget or told by someone who is trying to recall an intense dream they had the night before. Supporting this dream world is a brilliant, misty and intense score, as well as a striking cinematographic land where realities intermingle with the dangerous mysteries of the heart.

This film creeps, crawls (sometimes on top of you), and then - particularly in the last few minutes - slaps you in the face and walks away. This is not a film for everyone, but if you are fan of art house horror (particularly anything David Lynchian) then I have no doubt you'll find yourself as fully absorbed as I did.

Please take a moment to check out the teaser!

Once again, a round of applause to all who helped make this film possible, and thank you for giving me the opportunity to see it! Best of luck to everyone on their future endeavors!
Posted by Horror Habit at 6:45 PM 3 comments:

I have been wanting to talk about I Am The Pretty Thing That Lives In The House for several months but I could not seem to find the words - but I'm going to try to give it shot now. 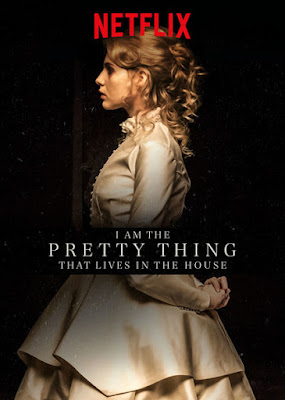 However, it took me some time to warm up to the film ... my conducting odd jobs in the background during the show didn't help... but when I did fully tune in, the entire watching experience changed. I wanted more, I wanted answers, I wanted to hug everyone.

In the second viewing I was completely absorbed, so much so that I wanted to touch the story, eat it.

I wanted to eat this film. Caress it. Devour it.

This is a super tactile, sexy film. Every little move is delicate and perfect. The voices and sounds are low, soft, and ghostly. Clothing, lighting, hair, the paint job in entry hallway, the books in the shelf - all shown through the screen canvas as if done by a master painter. Beautiful, simply beautiful.

Going back quickly to the first viewing, I'd like to take a moment to talk about the clothes. The woman depicted in the poster image, for example, plays a significant role in the film (no surprise there), however her role in the film suggests her time and place is in the early 1800's. Fans of history, such as myself, will quickly note that the clothing style is more appropriate for the mid 1800's.

This bugged me for a moment. Thinking to myself: how could such an expertly done film make such a mistake? By the second viewing, I realized my blunder. This was no mistake. I Am The Pretty Thing That Lives In The House has no mistakes.

By the second viewing I realized that I was transported to a world were time and being is intermingled, lost, without a home (outside the house itself). Memories, identity, truth, and linear steps in existence are left to the viewer to decide. This story calls into question what we know about ourselves and how we respond to "The Other Side".

I found the film as a whole, beautifully heavy despite it's light and airy initial feel. I loved it. I want to eat this angel food cake of a movie.

Not a film for everyone, but certainly a film for fans of slow, slow, slow thrillers. Or as a tour guide at a winery once told me about a part of the brewing process, "...slowly exploding...", which I found absolutely hilarious at the time because it didn't make sense to me, but it applies well (and makes sense to me now) in relation to this film.

The last few minutes are downright terrifying, for many reasons but mostly because the 'big reveal' is so completely opposite of the entire movie experience up until then. It shocked me, it actually frightened me. I ended up rewatching the last few scenes several time because I couldn't believe/understand what had just happened. I loved it.

In short, this is a stellar film and I think it's required viewing for story tellers in all medias. Pairs well with strong coffee or cold, cold water. Angle food cake. Watch with those who know how to appreciate extremely expensive scotch, or watch alone on a dark, late night.

I saw this movie on Netflix, or use the links under Find It. Watch It. on Horror Habit's side bar to locate where else you can find this original, heart-wrenching, masterful thriller.

Email ThisBlogThis!Share to TwitterShare to FacebookShare to Pinterest
Labels: Cringe Binge, Give Me Ghosts, I Am The Pretty Thing That Lives In The House, Well Done Horror
Newer Posts Older Posts Home
Subscribe to: Posts (Atom)