I was flipping through Netflix the other day when I saw this film's poster image. 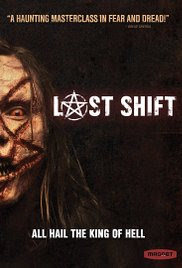 Eyes rolled. In my experience, poster images like this generally means that I'm going to be watching another hokey slasher film with not-so-bright naked women running around, and an absurd plot held together with a shredding string. (Don't get me wrong, I like those films too - I just take them in smaller doses, and I'm picky).

I WAS WRONG ABOUT LAST SHIFT

I'm not usually this wrong about movie posters. In fact I can remember only one other time I was this poor of a judge. Thankfully, unlike The Yellow Wallpaper experience, I was completely blown away by this film.

This is one damn fine quality horror show. It's also about evil ghosts, so that automatically bumps it up a few notches in my Yay! meter. Last Shift follows a new cop who has been assigned to work alone in the old police station - keep an eye on the place and wait for a team to remove biohazard (evidence) material so the office move is complete. Seems legit, right? No problemo. Unfortunately for her, the place is haunted with some very nasty nasty nasty spirits who are 'delighted' by her company.

I enjoyed this movie for a number of reasons. The acting is great, the plot is intriguing, the setting is superb, and the haunting elements are brilliantly effective. Damn fine quality horror show! Still don't like the poster image though. Last Shift is a smart thriller and hoarder of intense suspense, but then top it all with great dialogue, well, the poster just doesn't seem to fit/gives the wrong impression. Oh well, let this be a lesson to you - judging a book movie by it's cover is still very applicable.

If you are in the mood for a unique and yet! semi-classic and very chilling ghost story, then this one comes highly recommended.

Pairs with sandwiches with a long hair stuck in it, and what ever you can find in an old vending machine. Probably best watched alone at night, but will also work nicely with a small group and a slow cooker dish. Turn off all the lights, sit back, and be prepared to be surprised and frightened.

Here, in fact, watch this trailer - I think it will give you a better idea of what to expect:

I saw this movie on Netflix, or use the links under Find It. Watch It. on Horror Habit's side bar to locate where else you can find this creepy crawly feature.

Posted by Horror Habit at 6:11 PM No comments:

Ah.... comedic horror. Those gems in the movie world that not only split heads but also the sides. I love them so much. 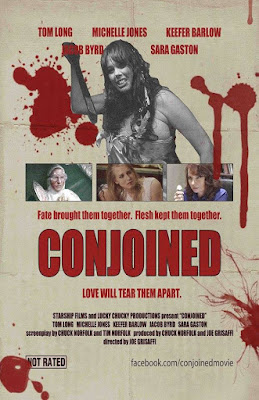 Joe Grisaffi, the director of this goretastic sidesplitter, contacted me recently and asked if I would be interested in reviewing this independent fun fest. After a quick glance at the story line, how could I not see Conjoined?

Internet dating leads one lonely man to the woman of his dreams, except dream girl is a conjoined twin to a serial killer sister. What could possibly go wrong?!?! I would say, oh, just about everything.

I spent the entirety of this film laughing, laughing so much sometimes that I had to rewind things just a bit to catch-up on all the wit. This is a dry, dark, hilarious film. Dark in the subject matter, for a lovey dovey couple trying to navigate their happiness all while tied to a sociopath, is a laughing matter only well done comedic horror can pull off. This movie is wrong, folks. Some things are just really really really wrong here. And by wrong I mean so so right. My Husband informed me several times that I: "Have a dark frame of mind...".

And then the end happened.

This story went from hilarious wrong to Oh My God they went there. I can't tell you where, as it will spoil the fun, but I can assure you it's rather "shocking".

With the very sharp and smart use of a small cast, effective settings, minimalist sets, and a whip-smart script, Conjoined is your answer to new level hilarious horror. Very fun, very wrong, very right and well worth your time.

Pairs with red wine all over the place, or experimental beers from a local brewery. Gather a group, collect the snacks (preferably something messy, think Cheetos), and prepare to laugh as the blood bath begins.

The director and team were kind enough to share this movie with me. If you have a Roku then you can see this film now on the Independent Network Channel. Or use the links under Find It. Watch It. on Horror Habit's side bar to locate where else you can find this very fun, absurd, and delightfully evil film.

Posted by Horror Habit at 6:06 PM No comments:

Email ThisBlogThis!Share to TwitterShare to FacebookShare to Pinterest
Labels: Beer-Runs, Blood and Guts, Conjoined, Fun For Everyone, Well Done Horror

My home has been burglarized four times since I moved in (2008). Thankfully items were only stolen from my patio. Until a new patio door was installed I had to barricade the door with extra panels of wood. I caught the last burglary in the act, and demanded my stuff back. This could either be considered one of my finest or idiotic moments. I got my stuff back though.

The invasion of privacy felt after you realize your home has been vandalized is a a powerful one. I dare say one goes through nearly all the stages of grief. Although I was primarily stuck in the Anger stage - going so far as to post signs all over my patio wall, cursing the thieves and their next of kin for seven generations - break-ins are a serious matter. They can be very dangerous, sometimes life-altering, and often times demoralizing.

They also make for some powerful horror stories, as demonstrated by the writer, producer, and actor Justin Doescher in The Break-In.

Justin contacted me recently and asked if I could review his film. I jumped at the chance (Love Love Love independent horror). So my Husband I wrangled up a dinner, settled into the couch, and watched a tale unfold that both caught me off guard and was loaded with sociological messages.

This story revolves around a pregnant couple who has recently moved into a renovated town home, located in a what appears to be a 'rougher' side of town. Their best friends have moved into the home next door - life is looking pretty good for the four of them.

The soon-to-be father just got a new phone and is recording his new life with it. All the time. My Husband and I chuckled at this, as he just recently got a smart phone for the first time. He no longer jokes about how attached I am to my phone. He get's it now.

Break-ins are escalating around the neighborhood, so the couple decides to invest in a security system. Here is where problems being to mount, as despite the added digital security, signs of a break-in in their own home are evident.

This movie is an excellent peeping tom into the realms of gentrification, the dangerous and very serious power of stress, fear and privilege, and the paranoia that evolves from it all. I did not think I would be encountering all these message in just one film! I love this about horror!

Filmed as found footage, a style that can be difficult to manage and make believable, I was pleasantly surprised by the honesty of the actors. Honesty is the first word that pops into my head. These characters are absolutely believable, comfortable, breezily attentive to the camera - and we, the viewers, easily responded to this excellent acting. So much so that my Husband and I turned to each other and said, "We would not be friends with them." The actors, probably. The characters, no. We don't run with that crowd. Which is why I was so impressed with the acting, I was immediately drawn in despite the characters.

The only complication I had with The Break-In were the cuts in-between scenes. My Husband found the few seconds of TV static distracting, I thought perhaps the white noise was meant to ignite a more edgy feeling, an uncomfortable nerve-racking feeling. If the static sound effect was intended for that purpose then it worked, although I don't think it was necessary to make the film more dramatic. It was plenty dark and daunting without.

The ending of this film is absolutely impressive - solid and bitter cold. Not an easy task, for found footage especially. With a story that began cute and sweet, in just an hour and twelve minutes, it turned very dark and twisted. I think my exact words were: "Eeegads, man! That's messed up!"

In all I very much enjoyed this film. It is creepy crawly scary and I highly recommend it for fans of thrillers, psychological horror, and independent films. A creative story that will leave viewers researching the internet for more of it's like (and the stories that inspire them), while also - probably maybe - locking the deadbolt.

Pairs with wine or margaritas, a nice and simple home-cooked meal, and in a small group of your closest friends. Close all but one of the blinds, turn off all the lights (except that patio light), and be sure to grab all the blankets.

Thank you, Justin, for introducing this movie to me and keep up the good work!

I saw this film on the director's Vimeo channel (direct link below). Or use the links under Find It. Watch It. on Horror Habit's side bar to locate where else you can find this jarring and quite unsettling look into some of the things we fear the most.

Here - check out the trailer (it will also take you to the movie)!

The Break-In from Justin Doescher on Vimeo.

Posted by Horror Habit at 9:35 AM No comments: