I find good werewolf flicks hard to come by. They seemed to have had a heyday in the 1980's and then dwindled into the weird and unforgiving Meh world where found footage films are fast approaching.

So I was intrigued by the cover of this small budget gem, and it was Sunday afternoon, and I wasn't getting out of my pajamas. 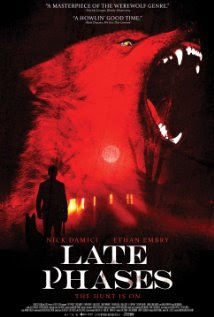 Late Phases is a lovely and haunting werewolf film. Although it could be argued that it's not the best in the industry, it's sure to stick with you long after you've watched it.

There are a couple different elements other than a Werewolf that makes this a creeptastic show.

First, the movie takes place in a gated community. I'm not sure about you but gated community's freak me out. Why the gates, honestly? Is it meant to keep people in or out? Is it just for show or do the gates have some magical power? Are they a symbol of protection and if so why are there locks on the doors? I'm CONFUSED .... and frightened ...

Third, the church plays an uncomfortably large role on the influence of the neighborhood. So you have a gated community, a blind man with guns, everyone's into the whole church thing, and there's a werewolf running around. [makes in a singsong voice] Sounds Like A Recipe For Disaster For Everyone!

Things that make this movie great and worth your while:


Now that said, my brother did not like the werewolves. He thought they were a little on the "cheap" side. I see where he's coming from and I raise him Originality. Sure sure, these wolves are no Dog Soldiers, but they're also lot better than many I've seen.

So keep your mind open about the werewolves themselves and just let the slow, creeping, and stark atmosphere this movie invokes smother you in your movie watching experience.

I think I'd watch this one again and not on a bright Sunday afternoon. This one will work very nicely on a cold, nasty night alone or with a very small group of quiet and dedicated viewers. This movie requires your full attention.

Cold soup, sipped. Watch on furniture that's seen its best days decades ago. Periodically scan the room for possible weapons against a werewolf attack - then realize you have nothing and recline in disrepair and accept your fate.

Posted by Horror Habit at 10:44 AM No comments:

Although it built up a lot of fanfare, and the trailers were super scary, As Above So Below doesn't appear as if it was fully embraced into the motherly arms of the horror community. 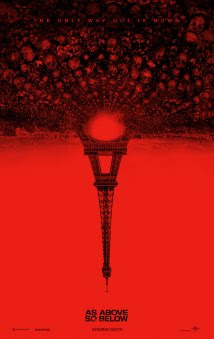 And for the about the first hour I honestly had no idea why!

A female version of Indiana Jones embarks on a tour of the Paris catacombs to find a precious physical piece of legend and history (because It Belongs In A Museum!), only to discover the horrors hidden within herself.

What's the problem here? Just the idea of the Paris catacombs are completely terrifying and anything Indiana Jones should be bank. On top of it all, the small gaggle of urban explorers She Jones gathers to assist her are all crawling through little caves, over bones, and digging themselves a smaller and smaller tunnel under the city. This Is Scary Stuff!

The problem is that in the last half hour of the film the story line fell apart. It gave me the sads.

There I was, cringing in the corner, telling the TV that they should Not be crawling in that little space. I was on the edge of my seat because ceilings began to crumble. Eyes were locked to the TV when the lights began to go out. And then, oh man!, they were lost - AND THEN suddenly I was frowning at the jump scares that meant nothing compared to the actual terror of getting lost in the catacombs. They needed no monsters or blood in this film to make it absolutely horrifying - but in the end they did use these props and that took away all the horror.

This movie is certainly a moralistic tale (if you couldn't already tell by the title) about not being a jerk and forgiving yourself. I feel they tried to make that a part of the movie surprise climax (the moral) but all I found surprising was the disappointing end.

That all said! I'm glad I finally watched it. I just wished it hadn't ended like it had...

This is not a great film choice if you're looking to scare yourself. This one is pretty alright with a crowd of friends and a couple background distractions to keep the energy levels up.

Watch in an uncomfortable place or perhaps somewhere small - like in a closet or large cupboard. Trail mix and drinking something from a CamelBak container will do nicely. Turn all the lights off but keep a flashlight handy (but be sure it's low on batteries so that you have to hit and shake it to find/use the remote).

Posted by Horror Habit at 9:41 AM No comments:

Email ThisBlogThis!Share to TwitterShare to FacebookShare to Pinterest
Labels: As Above So Below, Give Me Ghosts, Religions Gone Wild, Yeah ... No.

My turn to host book club this month and I decided on two short stories: The Yellow Wallpaper by Charlotte Perkins Gilman (Stetson), and The Lottery by Shirley Jackson.

Both masterpieces of the macabre, brilliant works of art, and written by two different phenomenal voices for women's rights.

I don't know what creative writing hell the story line for this movie was formed in, but I've been trying to forget I'd seen it ever since that fateful Saturday afternoon (years back) when I saw the poster image: 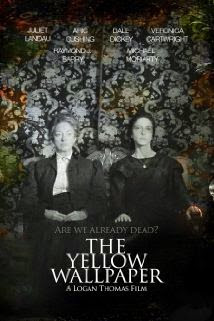 As I said earlier, Gilman's short story is a masterpiece. A masterpiece revolving around the horrific ways in which Victorian era women were treated by science, society, and in marriage.  I assumed that since The Yellow Wallpaper is a masterpiece with a true and powerful social commentary, no one would be foolish enough to rip it apart and turn it into a giant pile of cat puke.

That said! If this movie was not billed as an "origins" story (about The Yellow Wallpaper and the writer), then I wouldn't be giving it such a scathing review - I would have just given it a bad review.

I did not care for the dialog, or the acting, and although the scenery and setting was alright it was the story line that set me right off into hysterics, climbing the walls and begging to be let out (see what I just did there?).

I don't do this often, but I feel it's necessary to tell you exactly why I hated this movie so much and it's going to involve some spoilers. This movie is not some sort of tribute to the short story but an abomination that I think would have Gilman spinning in her grave.

This movie is about some form of vampires. I'm not kidding you. VAMPIRES. It also has a loving husband, and a daughter that went to Hell after burning in a house fire, apparently. Bonus Medieval knights and other random people for reasons I'm still not be sure of.

I went so far this morning as to re-watch the film (in super fast forward) to be sure I was remembering correctly how much I did not like the movie - to be sure I wasn't loosing my mind (See! I did it again).

And that is why, if this movie wasn't attempting to rip off a masterpiece, I wouldn't have hated it so much. It just would have been another movie with a strange and confusing plot line.

Very rarely do I despise a movie so much, but this one got to me - it got under my skin and began to drive me a crazy. Now I feel I need to rip it apart before I can leave it alone.

....and I think I'm done now. I've said my piece and peace. Never again will we cross paths 2012 movie version of The Yellow Wallpaper. Done.

Posted by Horror Habit at 12:42 PM No comments:

Email ThisBlogThis!Share to TwitterShare to FacebookShare to Pinterest
Labels: Creature Features, The Yellow Wallpaper, Yeah ... No.

It took me 6 months to finish The Taking of Deborah Logan. Six months for a 90 minute film. 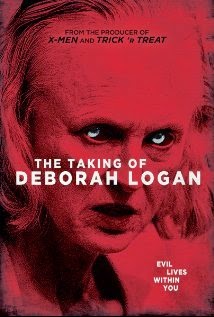 I struggled with this film for a variety of reasons.

First, I am a Health Science Research Specialist for the U.S. Government (so you can trust me, I'm here to help). The way in which the research was conducted on human subjects in this movie would have any Institutional Review Board spinning wildly out of control and this study would have been stopped pronto.

That said, any horror movie has to have its suspension of disbelieve, so I moved on and tried not to pay attention to the way the 'study' was being conducted. I tried.

Second, I don't have an issue with found footage films unless the found part begins creeping into "There Is No Way People Would Stand Here And Film This" land. Although the hospital scenes play a pivotal role in the film, there is just absolutely no way whatsoever that hospital staff would allow anyone to leave their cameras around to film people/patients/staff. That's because it's highly illegal to do so.

I tried with the study, but I just could not make it through the hospital scenes. So I set the movie aside for six months.

I returned to the film thinking I was overreacting. This film is highly praised and it's an original idea, I should just get over my hangups and give this one a shot.

And that's when THE SCENE happened. I will not tell you what it is but it's so crazy/original/stupefying/horrifying (you can't miss it) that I had to rewind and watch it over again and again. When I finally collected myself, my first thought was "Why wasn't the entire film that awesome?" And then the movie was over.

The best part of this movie happened in the last five minutes.

In all, if you don't work in the health care or research profession you may not notice all the inconsistencies and that-would-never-happens. You then might find the film really excellent. If you do work in those professions then perhaps just watch the ending and read about the little details later.

I really thought I would like this movie more. In fact, I'm surprised I found so many things I couldn't get over. This is not a bad film at all - rather good horror. I just won't be coming back to it again anytime soon.

Recommended pairings: eat something French - like a fish with its head still attached (a French restaurant tried to serve this to me once. Never. Again.) Drink bourbon straight out of the bottle. Wear overalls and have some dirty gardening tools hanging around.


Posted by Horror Habit at 2:15 PM No comments: