I stumbled upon this little gem while I was researching various paranormal television shows and channels on my Roku. And by researching I mean stalking. Fun fact, I love those damn paranormal television shows. LOVE THEM. Most people crawl into bed with a book, sometimes even a spouse. My Husband tucks me into bed and says "Have fun with your ghost stories, Sweet Pea." As he makes sure the Kindle is on to the Amazon or Netflix app before he turns off the light and heads to the living room to listen to politics or Neil Degrasse Tyson. He's a good man.

When The Creepy Doll came up top of the list on my Roku paranormal television search criteria I was like, "Whaaaaaaaaa HAHAHA and whaaaaa? Wait. Now I must see this."

I had the opportunity to watch this little beauty tonight! And man, let me tell you, it was absolutely nothing like what I was expecting.

First and foremost, the story line is brilliant. Brilliant. Fresh new couple discovers a baby is on the way - rushed marriage seems like the wisest and best option, and they also convinced themselves that they were in love. Tsk tsk tsk people. If you're going to rush into marriage make sure No Children Are Involved. Seriously.

In any case, new wife has a doll collection problem and new husband is afraid he's made a very bad decision on the marriage front. Things continue to get more complicated from there - but complicated in all the best ways horror movies have to offer.

If all that wasn't already a recipe for disaster then let me introduce you to the CREEPY ASS DOLL: 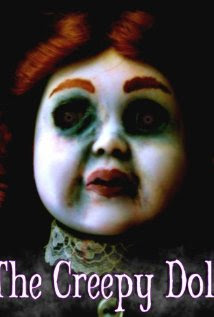 I'm not kidding folks, there was no false advertising here - this film has one of the creepiest dolls I've ever seen.

Please keep in mind that this is not a Big Blockbuster Budget Film. This is a film crafted under great love, small budget, dedication, and originality. Hats off to you guys. That was a Very Creepy Doll! AND very well done on the acting and the dialogue

Actually, let me talk for a second about that acting and dialogue. I was completely entranced. I could not look away. It was gritty, dirty, raw, uncomfortable, and dare I say: felt on the very edge of a Home Video of a Highly Dysfunctional Family Gathering during Thanksgiving. I kept watching even though I knew s*** was going to hit the fan and was going to get all over that nice dinner set...

I was absolutely impressed with this film. It had it's moments where I laughed out loud and I don't think the film intended it that way, but I think if a horror movie can make you laugh on accident then you feel more appreciation for it. Horror movies that make you laugh on purpose are great too - they're just geared towards a different audience. Horror movies that accidentally make me laugh, as far as I see it, hold a very close place to the heart. I don't think I'm alone here.

I see this film becoming a cult classic. Honestly. This is a film that deserves a large group's attention or, as in my case, sitting with a fancy IPA beer (Portland's Workhorse India IPA in particular), on the LazyBoy after a rather mentally exhausting day at work. Should I add that my husband was in the kitchen cooking? This seems important for some reason....

This is a fun film. I'm adding it to one of my favorites. A very honest to goodness creepy story that will surpass expectations. No blood or guts, no fast action. No tricks of the camera or wild music. No jump scares or otherwise typical activity. This is a film of its very own.

Recommended pairings: Watch in a business suite - especially if you don't work in the office environment, OR watch with a bunch of pillows on your belly. Like, so many pillows it's hard to move. Tea, cheep wine, or beer will work well. Add some BBQ. The messier the better. Be sure to get it all over your face and don't wash it off until the very end of the film. The dry crustiness falling off your cheeks plays a role. If you could set a creepy doll in a corner across the room from you - you'll be golden.

My brother and I decided to see Insidious 3 this week. It was a rather last minute decision and one I was a bit hesitant to embark upon. Minus a few outstanding exceptions, the third movie in a series is generally a disappointment.

Little did I know that the greatest disappointment in the entire movie watching adventure was the actual theater we visited.

The theater is a small 1940's gem tucked away in the University District of Seattle. It is now privately owned, and holds many fond horror movie watching experiences for me as well as a few Rocky Horror Picture show experiences.

I was sad to see that the carpets and walls were falling apart, the bathroom decaying, and they didn't even have butter to put on my popcorn. "We have none" is all the one employee said regarding the buttery topping.

We were the only people in the show (and I suspect the entire three screen theater). This all made me very sad. It also gave me chills to think of the direction that theaters, especially privately owned ones, are going.

Support your local independent movie theater (and movie stores - for that matter), people. Don't let these little beauties fade away!

Okay, on to the actual show. 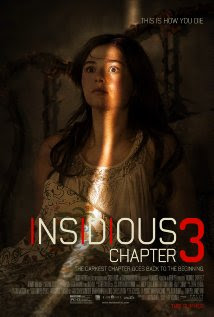 Like I said, my brother and I were the only people in the theater and we took full advantage of it. Talking loud, not turning our phones off, running around trying to scare each other, and so forth. We had a pretty good discussion about what type of horror movie style the Insidious series has become known for. Jump Scare is a term pretty typically used, but I prefer a style of my own invention: Fun House Horror.

Like a carnival fun house, the participant's/viewer's attention is purposely directed and guided through a horror experience, room by room and step by step. You absolutely know something is going to jump out and scare you, you just don't know when. For instance, in Insidious 3 (like the previous two), the viewer is never really given a sweeping view of the scenes ahead, you're only given a flashlight to follow, or a sound to pay close attention to.

Also like a fun house, the dialogue is pretty limited to the necessary elements in order to spook you. Much like a guide would welcome you to a haunted corn maze or haunted house. True to a fun house, the participant jumps, screams, laughs, and has the good feels once the ride is all over - BUT IS IT? There's one last scream right at the very end. In all you had a pretty good ride and will remember what areas made you scream the most, but when you really think about it, there absolutely is no solid reason why certain ghosts or creatures were there except for the explicit purpose of scaring you. That's it.

That all said, Insidious 3 is a pretty good visual fun house! I had a pretty good time and was pleased that I saw it. It's no better or worse than the last two - right on track as far as I'm concerned. The acting does it's purpose, the scenery and setting is very unnerving, and the ghosts and demons are Pretty Pissed Off For No Logical Reason Whatsoever. Which of course makes it mighty easy to make frightening for all involved.

If fun houses are your thing then I recommend adding this one to your list. The jump scare tactic is not for everyone, however. If you don't particularly enjoy the Getting Excited to Get Scared At Random Moments feeling then you might want to shelve this one.

Recommended pairing: freshly popped buttery popcorn - lots and lots of buttery topping. If you have a Jack In The Box toy sitting around then play it from time to time (during the quiet scenes of the movie would work best). Watch with a best buddy or with family. Be sure there is someone who can come up behind you and say "BOO" then laugh at you because the way you jumped and screamed was hilarious.

Posted by Horror Habit at 12:07 PM No comments: