If you have enjoyed any or all of these films:

The Howling
Twilight Zone The Movie (episode 3 - you know, the one with the kid)
Gremlins
some Amazing Stories episodes
Innerspace
The 'Burbs
several Eerie, Indiana episodes
and even Matinee

then you will love The Hole because awesome. I mean, they are all directed by the same guy, Joe Dante! I did not know this before I started watching the film. I just loved the film and then I found the awesome. 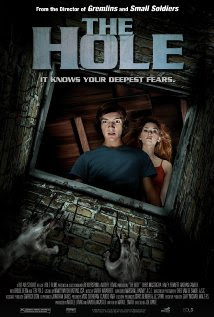 At first I thought this might be The Pit's cooler older sibling and then I was quickly made aware that this film is not necessarily geared for the younger crowd (like The Pit). This movie is more geared for the kid at heart who can handle killer dolls and seriously disturbing stuff.

Although this movie has silly happy budding adults find things moments, I was taken back by how truly dark it was. See also, domestic violence, teenage turbulence, etc.

My mother took me to see Gremlins when I was still toting around a blanket. She thought it was a kid's movie. It was not. The blanket was over my head the minute the eggs began hatching, and it remained there for the entire movie - complete with tears and pleas for escape. In fact, I kinda sorta stumbled across a support group for all those who suffered the same honestly accidental 'it's a cute little kids movie for adults' mistake. This movie is like that.

This is a great movie for Saturday afternoon or Saturday evening. Watch with devoted horror movie fans. Suggested paring: Heavily salted and buttered popcorn, hard liquor of choice and soda mix. Beer is okay so long as it's a strong micro brew. This movie is big pants entertainment time.
Posted by Horror Habit at 8:18 PM No comments: