Saw this film for the first time a week ago, alone, late at night, on a Sunday.

I need to talk to people about this film. This isn't so much of a review as it is a desperate cry for conversation. 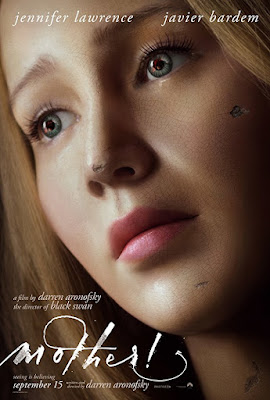 Out of all the Darren Aronofsky films I've seen, I've never had a need to converse afterwards. They all made sense to me. They all scared the crap out of me. I felt I understood them fully. In fact, I didn't even want to talk after seeing these films, I just wanted to sit still and absorb the horror by myself.

I was expecting the same with mother! but to my utter astonishment, I grappled for other people to be near and to hear.


What in the holy hell did I just see!?!

First, I would like to point out that one of the first things I noticed in this film is that it's obvious there is no stairwell, sidewalk, or path, leading up to this home's front door. Folks, I can not describe the absolute terror this struck in me.

And this is why I need to talk about this film. I was terrified by a lack of a sidewalk. A Sidewalk!

As someone who relies getting around town almost entirely by walking, this really disturbed me. So here is where I'd like to start the conversation. What did this film mean to you and why did you find it frightening?

This film is beautiful, *poetic* (using that word on purpose...), haunting, and jarring. With distinct visuals meant to stick with you for life. But what did they mean to you and why?

Alternatively, as I'm aware this film has a love/hate relationship with audiences, what about this film angered or frustrated you. I'm not looking for generic answers on either side. I'm looking for specific scenes or parts of the plot that resonated.

So please, world, share your thoughts with me and others. A week later I'm still finding myself staring into the distance, remembering certain scenes and wondering (while shivering) what they really meant.

I watched this film on Amazon Prime. Use the Find It! Watch It! links on Horror Habit's side bar to locate where else you can see this jaw-dropping film.