I've had this film on my To Watch list for a while - for two reasons. One: this movie poster is alarmingly interesting to me. Two: I hate this boring and generic title.

Let me introduce you to the '90s made-for-TV movie: The Haunting 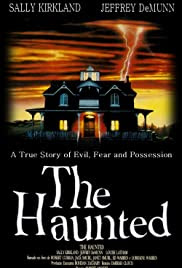 Folks, in the very first opening scene, this was me: 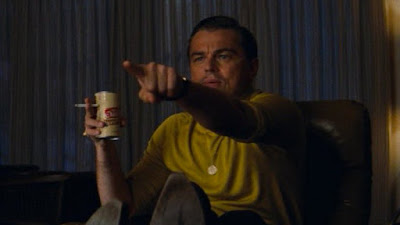 And that continued to be me throughout most of the film.
I've seen this film before. I know it! The feeling was, how should I say it ... haunting ...
Did I watch it on TV when it first came out? Perhaps. Did I watched it at some point over the last 20 years on some streaming device, drinking beer and zoning out on a Sunday afternoon? Also perhaps.
What strikes me the most about all this is how *good* the film is - how could I forget this film?!
Based on the book, The Haunted: One Family's Nightmare by Ed and Lorraine Warren, Robert Curran, and Jack and Janet Smurl, this story follows the Smurl family and the nightmares endured in their haunted duplex.
Not a new premise and it has all the classic haunting situations, but this is legit a fascinating tale, regardless if you believe in ghosts or not.
With a great cast that includes Sally Kirkland and Jeffrey DeMunn, this is not your average made-for-tv movie. Straight up, there were some downright disturbing and rather frightening scenes - my mind is still blown that I completely forgot about this gem.
Yeah yeah, some will scoff at 'based on true paranormal events' stories, but they're no fun and I don't want to play with them. This film is for paranormal fans, spooky and dramatic made-for-tv movie fans, and people who just enjoy a good tale.
I thoroughly enjoyed this film!
Best watched curled up on a couch, chilling the day away with a beer. Be sure to sit up and point at the TV if you also recognize this film from your past.

Now, I can't tell you where I first saw this film, but I noticed it was on YouTube. Note, I don't often advise watching free films on YouTube, for a wide variety of reasons but also the film quality is terrible. Use the Find It! Watch It! links on Horror Habit's side bar to see where else you can find this spooky thriller.

Posted by Horror Habit at 6:09 PM No comments:

Email ThisBlogThis!Share to TwitterShare to FacebookShare to Pinterest
Labels: Give Me Ghosts, Horror Habit Favorites, Mislabeled As Drama, The Haunted

Happy Halloween everyone!! Here is 18 brilliant short horror films to spook up your day.

So without further ado, below is my pick of some of the best out there. With a review of 18 words or less, and in no particular order, please enjoy Horror Habit's 2020 Short Horror Film Festival.
*Note, Blogger has gone through an update and I can no longer embed videos as I have done in previous years. Simply click on the title links - they'll take you directly to the films. 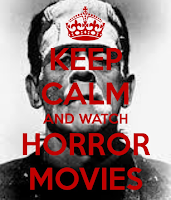 Shadowed: With clever visual effects and a super spooky home - this one should not be overlooked!
Oscar's Bell: A father/son camping trip goes terribly wrong when *something* comes out of the woods. Very scary!!!!
El Aura Azul: A little Colombian ghost story shocker that has a lot happening in it's 8 mins.
Catcalls: Dude, you messed with the wrong women!
Sweetie: A slow, menacing tale about the perils of not having any treats during Halloween. Turn the sound up...
Craspec: A brilliant, haunting and jarring, French short that begs the "what is hell?" question.
Finley: Absolutely outstanding!! Equally funny, clever, and bloody. Loved it!
#brunch: When two friends meet up for brunch, an unexpected visitor also makes an appearance.
Mr. Dentonn: A Spanish horror fantasy in the vein of The Babadook and Slenderman. Beware, little children...
Boobs: Super short, sweet, disturbingly funny and frightening.
Noidan Merkki: A Finnish Found Footage Film!
The Bride: A fascinating new take on a classic spooky story.
The Preying Mantis: It's a half hour, so it takes a while but it will be worth it for the ending.
Ayuda: Thrilling, dramatic, and scary! These poor guys were picked up for the wrong job.

Ding ... You're Dead: Folks, all you need to know is that it's about a killer microwave.
A Doll Distorted: Beautiful, atmospheric, and seriously f*cked up!
Dawn of the Deaf: Whoa! This is a doozy - a lot packed in here. Also, personally amusing because I am half deaf.
Viola vs The Vampire King: I'll end this year's film festival with some very fun grindhouse goodness!

Bonus, I stumbled upon the making of Viola vs. The Vampire King - damn thing was so sweet, wholesome, funny, and adorable - I just have to share it too. It also helps to see how much work and love goes into even the shortest of films. Thank you artists for sharing your work!

Posted by Horror Habit at 3:57 PM No comments:

Email ThisBlogThis!Share to TwitterShare to FacebookShare to Pinterest
Labels: Short Horror Films You Need To See

Folks, I promise this movie title will make sense by the end of the film. Just ignore it for now and strap in for the wacky, weird, yet wonderful ride that is: 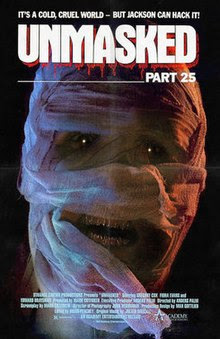 Here we have a serial killer [cough, cough - a famous one - cough] who has fallen in love and is questioning his purpose in life.

In viewing, we follow his awaking, introspection, and budding romance with a blind woman who conveniently can't see *who* he is. We enjoy this absurdity all while wandering through London's dark streets, abandoned buildings, pubs, and in a very (very) 1980's setting.

It's quirky, it's sweet, it's a blood bath with epic kill scenes. Folks, it's fun and original! And that's about all I have for you - I'm reluctant to share too much because the "unveiling" is part of the fun. Particularly by the very end, so stick with it, I think you'll find it just as clever and entertaining as I did.

I watched this film on Tubi, or use the Find It! Watch It! links on Horror Habit's side bar to locate where else you can find this whackadoodle feature.

Posted by Horror Habit at 3:58 PM No comments:

I can't believe I'm not hearing more about this movie in my horror communities, so let's start now. 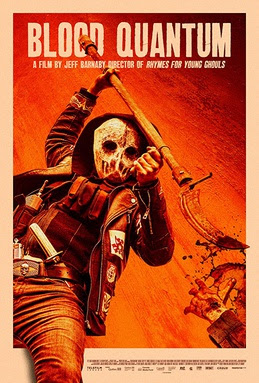 When I first saw there was a zombie film about a world were only the first nations' people are immune from the disease (including bites!) - I think I dropped everything and folks, I watched this film twice.

Filmed on Mi'kmaq land in Canada (yes, the same nation from Pet Sematary), and directed by Jeff Barnaby, also of the Mi'kmaq tribe who grew up on the Listuguj reserve in Quebec, this movie immediately sucks you into a haunting but beautiful atmosphere that is ripe with anticipation excitement, and ass kickery.

The symbolism, metaphors, juxtaposition, and allegory in this film are powerful, and never let up. From the real horrors of drug addiction, alcoholism, poverty, and double standards to a lack of access to healthcare and resources, this movie has a lot to say about history, systemic racism, reservations, and the nightmares therein. Also zombies.

I grew up in South Dakota, just outside of two reservations where, like in the film, our communities were divided by one giant bridge. Something that resembled a shudder rippled through me. I'm still not sure what exactly it was. Either I found this similarity so shocking or it was the beginning of how much this was going to kick my ass with its quiet, justifiable rage - either way, I was hooked from the opening credits.

I could talk for days about so many elements of this film and in the second viewing I saw still more - there's one scene in particular where a white man is carrying a blood-stained blanket into a safety zone and wholly shit, the peoples' response at seeing a blanket riddled with disease is nothing short of:

As a zombie film goes, this one is typical with most zombie plot lines: outbreak suddenly happens and a band of people have to fight for their lives. It also has two distinct periods - the opening one (break out happens) and 6 months later (survival). Note, I had to pay the most attention to the second period, as that has the most attention to detail and feels very different from the first half.

Bloody, gory, thrilling, dark and gritty - this film has a lot to say and I think you should listen. As Barnaby said: “My films are a gateway drug to better conversations.”

There's so much about the making of this film, the tribe, the people involved, and hundreds of years of history that I could, again, go on for days. In the mean time let's start here - a fantastic LA Times article and interview with the director, and here's an in-depth look by the Guardian into the history and meaning of 'blood quantum', just to name a few things. Please check them out!

I watched this film on Shudder, or use the Find it! Watch it! links on Horror Habit's side bar to locate where else you can find this ground-breaking feature.

Posted by Horror Habit at 4:06 PM No comments: 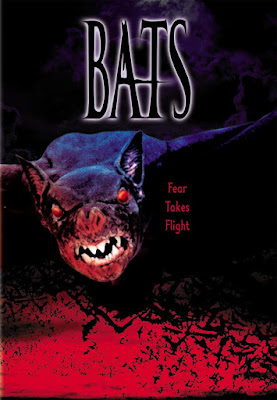 How in the world did this film escape my knowledge for this long?!?!?!?!?! I had actually started it a few months ago but turned it off after the opening scene where two teen lovers are taken out by a colony of flying creatures. The scene was so epic and unexpected that I wanted to wait until I could truly appreciate the experience (by not vacuuming and doing dishes).

OMG I love this film

I mean, just get a load of this particular creature!! 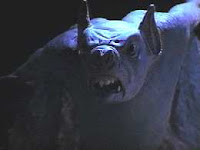 Seriously folks, the bats in this film are 100% worth checking out. Not only are they funny at times, but they are also alarmingly weird, uncomfortable, and legitimately a little terrifying in a weird, uncomfortable, and a little terrifying sort of way. How this film isn't mentioned in cult classics along side Tremors and Gremlins more often is beyond me. I'll try to stir up some better recognition though. For instance, there is a battle in the town square that blew my mind. I was left speechless but so entertained I think I actually clapped a little bit.

Bonus! It stars Lou Diamond Phillips, who plays a wise-cracking, small town sheriff and he does it so well I was delighted to read in IMDB that he ad-lipped many of his character's parts.

Premise: genetically mutated bats are on the loose in quaint, little Gallup, TX.

That's all you need to know! Now run for your lives!

I don't think I can stress enough how entertained I was by this film. Not entertained by the "cheapness" but rather by it's quality. It's good. It's running on typical and somewhat generic material, but there's a clever effort here and it shows. I think it helps that nearly all of the bats are *not* CGI.

Overall, I legit enjoyed this movie and look forward to watching it again. It has skyrocketed to the top of my favorite '80 - '90s creature features.

Best watched in a fun setting (perfect for a Halloween night with the right family, for instance) or movie binge night with friends. Pairs with comfort foods, a cigar, and western attire.

I watched this film on Amazon Prime, or use the Find it! Watch it! links on Horror Habit's sidebar to locate where else you can find this howler of a fun feature.

Find It! Watch It!