It's that time of year again! Where I, for absolutely no good reason what-so-ever, will watch and review a horror movie everyday in the month of October. It's also the second anniversary of Horror Habit [back pat].

I've got help this year, however. My brother will watch and a review a movie on the dates that I'll be blacksmithing. That's right folks, I blog and forge steel. Why? Because awesome.

I stopped into my favorite local movie store again today, to get my movie watching madness and mayhem started (and to pay some late fees).

The gems picked out already:

But I've learned a lot since last year's challenge. Namely:


I look forward to spending another year sharing stories with you!

Posted by Horror Habit at 7:14 PM No comments:

When I first began the film I thought it might be a slightly hilarious movie about little puppet/claymation demons that terrorized a family. I was actually looking forward to that type of story.

Obviously, I didn't do my research first and I was very, very wrong. 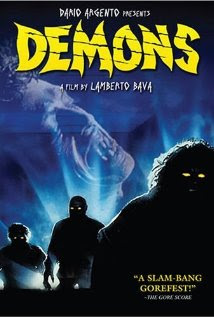 Demons is about people who turn into demons while at a movie theater. Did not see that coming, good on you writer, Dario Argento.

This is one of the grossest films I've seen in a long time. Side-splittingly-funny-cringe-face gross. This is not a film for the brain, however. Leave your brain at the door and just sit back and let your eyes do all the work.

I kept thinking this would be a good movie to have playing on an old television set in the background of another horror movie. Preferably during a late night scene when a character is suffering a bought of insomnia following a nasty break-up, and doesn't notice the menace creeping up behind them. Demons would be a good movie for that.

Demons would also be a very excellent film for late night movie gathering with friends. Preferably rowdy, drunk friends who like to throw crinkled beer cans, popcorn, and random pieces of paper at television sets.

The ending surprised me quite a bit, and it's perfect for this epic gore fest.

I really don't have much else to say about this piece. It's pretty painful to watch for multiple reasons, but that's also what makes it fun. I ask that you don't make the mistake I did by anticipating anything from this film. It's a mess all over place, just the way it was intended.
Posted by Horror Habit at 7:15 PM 2 comments:

So I decided to take myself out to see this movie at a ehhh, getting run-down theater in a famously sketchy neighborhood. Why? I DON'T KNOW.

I simply decided it would be a good idea. And my middle name is Danger. And it was a Sunday. 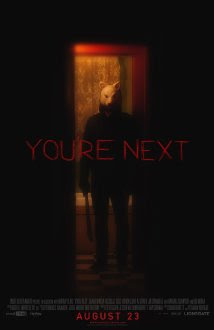 You're Next turned out to be an excellent movie choice for this particular random decision. When I got out of the theater I was ready for hand-to-hand combat (especially since the sun was going down and I had to wait for the bus home for 40 minutes). That said, I decided to call my Husband instead and stay on the phone with him until the bus arrived. But Still - I was ready for anything. [roundhouse kick]

I suspected things early on in the film so the ending - for me - was not super duper surprising, but it was still very entertaining and quite the adrenaline rush. I glanced over a Seattle Times review that said the movie got better as the characters died off. I have to agree. Although I thought the movie was good from the beginning, it became, dare I say, better as people died. What a really terrible thing to say, I know. I think the format and development of You're Next, the characters, and the release the audience experiences as the (initial) killers are killed speaks a lot about ourselves as a nation, community, culture, and as individuals. Primarily: why is this entertainment?

I suppose you can take this film in two hands. In one hand you have a self defense blood bath story, while in the other you have an underdog who never quite fit in but kicks ass when the pressure is on. You're cheering while blood is getting on everything. Do with that what you will.

In any case, ultimately, I'd say this movie is a story as old as time: It satisfies the vengeful blood-lust in all of us, calls out the underdog cheer from the not-so-evil side of our nature, and makes every socially awkward family situation you've ever been in look good.

Recommended pairing: well, I ate an entire large bag of popcorn. Not sure how that happened but there you go.

PS: This entertaining dance-around-the-living room-in-just-your-socks song will never be the same for you:

Posted by Horror Habit at 5:13 PM No comments:

Email ThisBlogThis!Share to TwitterShare to FacebookShare to Pinterest
Labels: Bad Humans, Blood and Guts, Cringe Binge, Fun For Everyone, Well Done Horror, You're Next

Oh dear or my. Where do I begin? 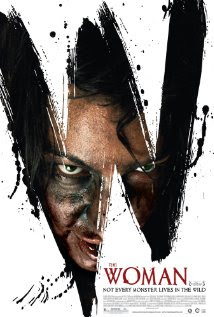 I suppose I'll start with the bad:

#1: There is very little bad in this film. There is no cheese or humor, none. There is a teacher that I think was poorly cast. Otherwise - well done.

The good - no wait, questions:

How did this movie idea come about? Was it prompted by the 6:00 news? Personal experiences? Research data? If so, the human race get's an F-. Because we, as people, suck. If this movie idea was not initiated by any other means except absurd imagination, then good for you human brain. You can create the most inhuman brain things. [slow clap]

I'm disturbed because this movie is about an 'ideal' family that hoards secrets and people. SECRETS and PEOPLE, like a disturbing amount of families do - which makes this an everyday horror film. And that makes me a little bit sad inside.

Thankfully, I think very few families hoard feral people. No doubt it might feel like it at times, but statically and scientifically, the people holed up in homes are not feral. Just pissed as hell.

Almost everyone in The Woman earned a great big fat gold star in assholery. The saddest thing is - they all earned it because that was all they knew. And that makes this film truly chilling. People acted out in the only ways they knew how to:

Although these basic concepts were relayed, they were understood in the most catastrophic atmospheres.

This movie covered the characters in an everyday horror so subtly, yet so much, that it burst in flame and then doused with a whole lot of feral woman. They didn't need a feral woman to make this a horror movie. The feral woman turned this horror movie into a nice, clean horror package.

Sure, the woman tied up in the basement made the movie, and made it mighty gross/terrible/wrong, but the actual monster in the film was running the household. THAT is what made this film truly horrifying - because it still happens, again, and again, and again.

Posted by Horror Habit at 11:39 AM No comments: