My Husband, the non-horror movie fan, is on another trip out of town, so you know what that means!!!

Unlike last time, where my binge festival was cut short because I could not, would not stop watching Gordon Ramsay's Kitchen Nightmares, this time I'm serious about my horror movies, and well, I finished Kitchen Nightmares.

Like last time, I've started my festival with another random selection of movies from the local library. This place never stops surprising me.

It's hard to describe how I felt when I came across Roar. At first I thought it was misfiled and should have been in the Documentary section. No, no. It's a movie - and the tagline on the cover: "No animals were harmed in the making of this film. 70 cast and crew members were." 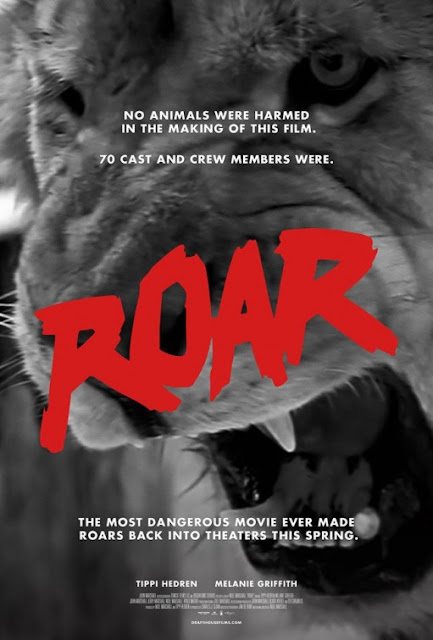 I'd never heard of this movie before, so I took a quick look through IMDB and the words that kept jumping out as I scanned the Trivia: "mauled", "madhouse", "hospitalized". "Gangrene" showed up at least once... Several reviews also included: "Have to See It To Believe It"


I whole-hardheartedly agree. My review won't do this film justice. You just have to see it to believe it.

Some would argue this is more of an action/adventure film (and it is) but it's also a bizarre horror show. Horror in ways I still can't quite put a finger on... Could be: The mauling is real.

This is a difficult film to watch. Difficult to see the lions attack themselves and others. It's also incredibly claustrophobic. The man living with these lions is crazy. Crazy in love with these big cats, but still crazy. Also, after what I've seen, I went ahead and nominated him for You're The Reason Your Friends and Family Have Ulcers award.

I live with just three cats and it's hard enough trying to keep them off me (and the counter) when I come home and it's dinner time. Now, imagine that with what appears to be 50+ lions, cougars, tigers, and panthers just wandering around in your home.

This film, in a word, is: insane. I watched most of it with my jaw dropped. Not because it's particularly good but because it's just that insane. I can honestly say that I've never seen anything like it.

Combine a healthy heaping of The Birds and Grizzly Man with innumerable cat videos on YouTube and scenes from Dog Soldiers (where they're running through rooms in the house) - boil it all down to a thick paste and then slather it on a large slice of the most bizarre yet heartwarming documentary you've ever seen. Serve your friends and family with a piping hot - sometime bloody - dish of: Roar.

Through all the film's madness, I have to give it's ending a lot of credit. It absolutely surprised me. I maybe even teared up a bit.

Although there won't be a Roar 2, Tippi Hedren, along with husband and co-star Noel Marshall, started the Roar Foundation so these big kitties and others are taken care of and protected.


This film is an *experience*.

Watch with gutsy family members - human and four legged ones. My cats were fascinated with this film. FASCINATED. Pairs with anything cats won't eat.

I rented this film from my library. Use the Find It. Watch It. links on Horror Habit's side bar to locate where else you can find this very, very unusual film.

Posted by Horror Habit at 7:20 PM No comments: