The Phantom Carriage aka Körkarlen (1921)

I've stumbled upon not one but two amazing things recently!

#1: While perusing my Twitter feed the other day, I ran face first into exactly what I was looking for but didn't know it yet. A little group of bad ass ladies known as:

I became even more excited when I realized that they must be reading my diary or IN MY BRAIN.

There are 10 Honeys in all, each focusing on the many different aspects, genres, and mediums of horror. They are smart, hilarious, stabby, bitey, fun, and from what I can see and read of their excellent contributions to horror  - all awesome. You must check them out! Follow the link above to go to their website. Listen to their podcasts, read their bios, follow their Twitter, and more! I've also added them to my Blogs and Sites You Must Know About list, for those of you who miss this particular post because lame.

I've been saving this one for a special occasion, and what better occasion than this!

I enjoy silent films. In fact I have a rather large collection of them, but this one somehow slipped by my Excellent Silent Film radar for a very long time! Leaves me thinking my radar not a working so good....OR I haven't been paying enough attention to Swedish silent films. 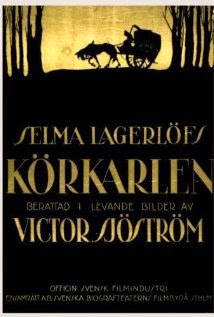 This film was apparently a huge influence on Ingmar Bergman (no relation, sadly), and is very highly regarded although often forgotten. I can see why on both fronts! It wasn't until recently that they've been able to put the pieces of this work back together again - to make it available in a digital format. It is also one of the best horror films I've ever seen.

Although this one *could* be shelved in the Drama section, it would sit better alone or next to Charles Dickens' A Christmas Carol.

There are less Starts and Scares with this one than there are Chills and Tears. True true, this story is about ghosts but is it is also very much about addiction. A story about alcohol addiction told in a terrifyingly haunted and bone chilling way that blew the socks of my expectations of 1921 cinematic story telling.

First of all - the cinematography is Amazing! The music used in the DVD version was simply superb and spot-on. The acting and scenery were so beautiful it hurt. While the special effects just straight up tossed me out of the chair and onto the floor where I stayed for the duration of the film.

Then, at the very end, while I was bawling my eyes out a little bit, wanting to hug the television but instead telling it that Dickens has got nothing on this film - the movie suddenly ended with the word "Slut" happily typed out against a black screen. A bell merrily chimed at this word's arrival.

Turns out this means "The End" in Swedish... apparently...I did not know that...

So, although I was sniffling and teary-eyed by the end, I was laughing out loud by the very end.

In closing, I'm mashing up in a review my finding The Horror Honeys and The Phantom Carriage because both are lovely, awesome, inspiring, fun, shocking, exciting, and incredibly unique. Be sure to check out their site! And thanks to the Internet Archive, you can also watch this bad ass film here (although the soundtrack is different than the DVD version). Enjoy!

Posted by Horror Habit at 3:33 PM No comments: