I have friends where when we meet up some of the first words out of our mouths are: "Have you seen....?"

In fact, most of the content on my Have You Seen page is collected from these conversations! I have great friends. 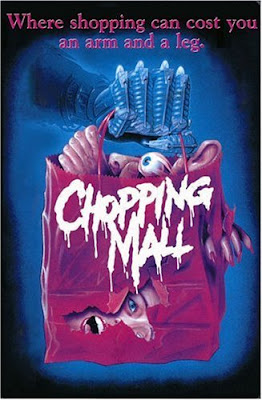 First and foremost, this film is simply offensive on multiple levels. Multiple. Levels. But, that's pretty much what I'd expect with a film where killer robots are on the loose in a shopping mall.

From IMDB: "Eight teenagers are trapped after hours in a high tech shopping mall and pursued by three murderous security robots out of control."

*You had me at murderous security robots*

Fans of schlock entertainment will find lots of entertainment with this film. I was actually surprised by how entertained I was - and I have a healthy appreciation for terrible B films and my valuable, precious time.

With a plethora of campy moments, eye-rolling one-liners, 1980's nostalgia, and really amazing kill scenes, Chopping Mall, is a ridiculously innovative slasher that will latch on to the heart (with lasers) all the B rated and cult following feels.

Also, I can't get over how funny the film's tag lines are - I think this list should continue growing:


Film will pair wonderfully with a group of friends (after a shopping spree, of course), beer, more beer, pizza - or preferably - a truck load of food from the local mall food court.

I watched this film on Amazon. Check out Horror Habit's Find It. Watch It links to locate where else you can see this absolutely absurdly entertaining film.

Posted by Horror Habit at 1:38 PM No comments: