The rain let up a bit yesterday so my Husband and I decided to make a break for it and head outside. While running some errands we took a moment to walk through the park, stare at some pigeons, and chase a few ducks around.

That's when we heard the shouting.

From where we were standing, we watched what I can best describe as Clockwork Orange's Meth Friends, walking up the street and tossing around this man's umbrella, while umbrellaless man was shouting, screaming, threatening, hounding them to give it back.

It was ugly. It got uglier when the ruffians began to beat things with the umbrella.

I looked at this mess, looked at my husband, looked back the mess, looked back to my husband and said, "We should do something" and began to walk forward. He took my arm and said, "We should call the cops." Logically, a good idea. I have some sort of Jump In Where Trouble Is Found and Solve The World's Problems vein in me that very well could get me in trouble some day. More on that later.

Cops were called, things got a little uglier but thankfully no further weapons were involved other than fists and a bent umbrella. Everyone walked away before the cops arrived except us. Naturally, I was a little shook up and my Husband looked at me and said, "So, how does a beer sound?" YES.

We saddled up to the bar and told our story of woe to the bartender, and that's when I noticed a bunch of gore-covered skeleton's chasing after a guy on the television screen. WHAT IS THIS? I cried. 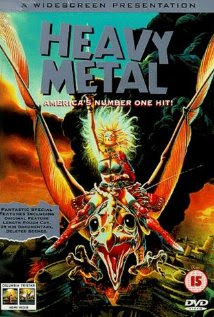 What I was watching, my lovelies, was the animated classic Heavy Metal. Not typically categorized as a horror movie - more of rock animated sci-fi film - but the skeletons sold me on the horror interest. That and it's one hell of a crazy film, which suited my one hell of a crazy late afternoon.

We closed up, ran home, and pulled the film up on Netflix. What happened next was me watching nearly two hours of naked women trying to take down or take control of an evil green alien orb. Not what I was expecting. My Husband, who saw it once but long ago, eyed me cautiously when I said I wanted to watch it. "I'm not sure you would like it..." is all he said. I now understand why.

I wanted a comic book-like horror movie, what I got was my tilted head, two squinty eyes, and a big long sigh. No, this was not my favorite film. In all, this movie is a high school boy's day dream - and in the end I appreciated it for that element. Yet, I still had a problem with the women portrayed in this classic. They were either sex hungry succubi or mute ingenues [YAWN]. Ready to move past this now, society. I did my best to push the misogyny aside but it certainly didn't help me put this classic on my movie shelves.

This over-the-top surreal movie is not typically likened to horror - but it is bloody, graphic, and harbors many horrific ideas. Much like my late afternoon. As surreal as my real life adventure was (umbrella stealing leading to face punches), by the end I was just too exhausted and confused by the portrayal of such behavior to appreciate what exactly happened, ultimately leading to my temporary disappointment in peoples.

I'm sure this is a favorite movie for many. I'm glad - seriously. More movie copies for you. For me - I'll just keep on keeping on, doing my best not to get into too many fights.