It's snowing in Seattle.

Folks, when it snows here everything quickly descends into pandemonium. See for yourself - this guy documents the madness pretty well.

I'm avoiding the looting, societal breakdown, and "It's like Mad Max but with Amazon Prime vans" outside and hiding under my blanket, watching films.

I've already watched The Head Hunter (highly recommend), the new Dracula miniseries (going to sit on this one for a bit, it's ... different), revisited the beloved Rocky Horror Picture Show (LOVE IT), and, of course, the adorkable: Night of the Living Deb! 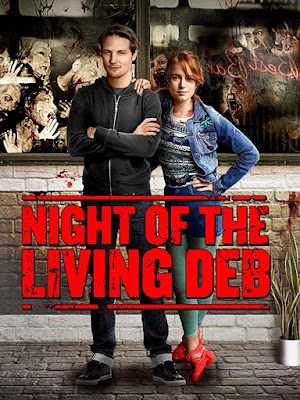 With a few exceptions, I do not like romance comedies - I think I like about maybe three. Every once and a while though, one creeps into my heart.

**I also just watched a Hallmark holiday movie for the first time In My Life last month. I laughed so hard I actually enjoyed myself. Someday I might write a paper on the uncanny similarities between low budget campy horror films and these Hallmark holiday films... ***

When horror, comedy, and romance are mixed though. I'll take it. The more blood and gore the better. I had never heard of this film until last night though. I thought that was a shame so hence the write-up today.

First: I love this title. It's just .... just so delightful!
Second: I was alarmed by the similarities I see in myself and our dear Deb, here. Right down to the enormous beater of a car. She doesn't trip on a slight incline and plow into a table full of guys - knocking their drinks everywhere/on them though. I will never forget how quickly those fellas jumped back from their chairs as my head and outstretched arms played battering ram with their beverages....

This film is a real chuckler. A sweet, witty, and fun chuckler. I was particularly fond of the fast comebacks and quirky atmosphere. The story revolves around Deb meeting Mr. Dreamy one night at a bar. By the next morning, both hungover, they realize they woke up to a zombie apocalypse. Hilarity ensues.

Well written, succinct, warm and hilarious (the plowing through zombies in a beater car was ridiculously entertaining. See what I did there? I brought the battering ram visuals right back), I thoroughly enjoyed this film. It was also a real treat to watch while my own "zombie apocalypse" was occurring outside.

Now, some reviews on IMDB would say otherwise, and I'm just going to assume those reviewers are new to movies - especially smart, campy movies.

If "horror" is not your thing but you enjoy as fun-loving creature feature absurdity plays on the screen, then this one is for you. A particularly great choice for cold nights in, surrounded by your best people.

Pairs with drinks that have dairy in it - alcohol encouraged. Best watched in clothes you just can't seem to get rid of even though they're a few decades old.

I watched this film on Shudder. Use the Find It! Watch It! links on Horror Habit's side bar to locate where else you can find this cheeky gem.

Email ThisBlogThis!Share to TwitterShare to FacebookShare to Pinterest
Labels: Beer-Runs, Creature Features, Fun For Everyone, Horror Habit Favorites, Night of the Living Deb