You know what is really amazing?

You know what else is really amazing?

When a really awesome person you only met a couple times, a year ago, reaches out to you with a desire to share a movie watching experience - with a film that really moved them - and you were the first person they thought of.

You know what is even more amazing than that?

When that random reaching out occurs at a time in your life when that's exactly what you needed. 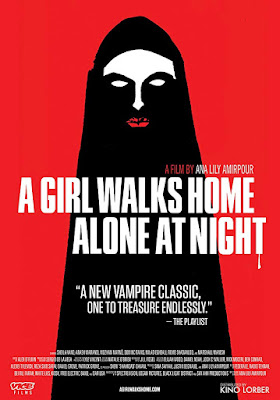 In walks A Girl Walks Home Alone At Night. This one has been on my radar for five years. I knew - KNEW - that this film, in order to be enjoyed/understood properly, was going to require a very specific time and place.

I didn't know what that time and place was, for all those years, until yesterday.

Turns out that time and place is when you need a specific human connection. When your world looks its darkest, and you know it will be alright eventually (hopefully), but right now you don't know what to do.

This film is beautiful. It's also very dark and dirty. Hopeless. Hard to expect anything less from a place called: Bad City.

Filmed in black and white, under the backdrop of destitution and depression, it screams nightmares from the darkest places of hearts and minds - but there's hope. Still.

Did I mention there is a vampire?

Destitution, depression, nightmares: Of Course There Is Going To Be A Vampire!

The film is in Persian, created in California, and the surroundings (despite not knowing the time or the place, specifically) has the distinct feel of a 1980's drug-fueled religious and political nightmare. Time for a bad ass vampire who preys on perpetrators of the nightmare and not those who suffer from the nightmare's affects.

Poised and powerful, this film has a lot to say (about people, morals, and human connection - be it a good or bad connection) and yet says it with very few words and more with motions, emotions, style, music, and a very adorable cat.

If you're a fan of Night Owl then this film is an absolute must see. You can read my review of that one here. In fact my thoughts of Night Owl (or Nite Owl), applies perfectly to A Girl Walks Home From Home Alone At Night: "Personally, I think vampires look best in black and white and covered in their own existential horror."

I'd like to believe that everyone who sees this film will understand it (despite viewing settings), will engage in conversations surrounding it and what it is saying, and will inspire viewers to seek out more versions of horror (and what that word means in cinema and entertainment). I would like that.

Knowing that won't happen in all cases, I'll just warn you against reviews that put this film down as boring or confusing. Those reviewers are missing the point and are new. That said, if your'e looking for a fast action, bloody film, then these are not the droids you are looking for.

Pairs best with withdrawals and small bits of food, taken in slowly. Alternatively, beer, pizza, and the company of a soul that needs your very specific company at that specific time, encouraged.

I watched this film on Amazon Prime. Use the Horror Habit Find It. Watch It. links to see where else you can find this existential, experimental, directorial debut.
Posted by Horror Habit at 5:37 PM