Can't live with them. Can't trust them not to kill you when making love or war. Amiright?

I watched this movie fairly recently, and although I was quite taken with the film at the time, it haunts me still. More so than before, if that makes sense. I can only assume it will be all consuming before too long.

Not sure who thought to film the entire movie in grainy black and white but Awesome. I mean makes total sense. I don't always watch moody art student films but when I do, I watch Nite Owl. They did this one right. Personally, I think vampires look best in black and white and covered in their own existential horror. 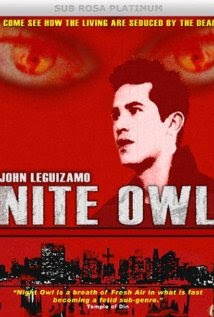 This is a rather sad horror film, but horror all the same. My only complaint is that they tried to place the movie in the early 80s but it was pretty obvious to me that it was the early 90s. First world problems.

That said, I wondered if perhaps this film was also a door into New York's changing social  and financial structure during the 80s...

The loneliness, isolation, addiction, and the attempts of non-vampires to make the vampires' world a better place (or  make them pay for making everything worse) surprised me - how well it was done surprised me - how much I'm still thinking about what it all means surprised me.

I highly recommend this film if you are a vampire fan, art movie fan, or  a fan of movies that tilts your head just a bit - and then keeps it there for a while - just because.


Recommend pairing: sad pizza and dusty wine. Surround yourself in either an uncomfortable setting or stay up later than you want to. Best watched alone.