I'm a little bit ashamed to say that I've never seen this series. Even as I type this, I know nothing about it except I'm pretty sure I'll like it.

We don't have cable, and I recently obtained the first five episodes. 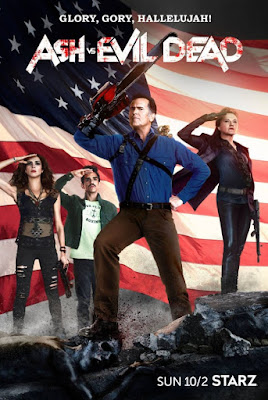 I do know that I love both Evil Dead movies, as well as The Army of Darkness. I also can't quite get enough of the awesome that is Bruce Campbell. Figuring there's going to be a win win here.

That said, I'm afraid I'm not going to be confident in my final review until I see at least the complete first season. Which means my final review might not show up for several more days (a week?).

In all, I'm getting started on this show now, finally. Stay tuned for more - the binge watching of Ash vs. Evil Dead beings.... NOW

Okay!! So I finished the first season of this show and have concluded (to no one's surprise) that it's awesome.

I actually enjoyed the second season more than the first. The first felt a little clunky - until the final few episodes. Second season shot off like a shotgun - spraying demon guts everyone.

I even got my Husband to join in the demon killing fun. He's was like this through pretty much every episode, though:

He'd be laughing one minute and then grossed out and alarmed the next. It was fun watching him watch Ash vs. Evil Dead.

In all, this series is exactly what you think it's going to be: gross, fast, hilarious, a little creepy, very messy, smart, and even a little sad and serious at times. Well done and fun! Watch with friends.

I rented this TV series from my local video store (Rain City Video). Use the links under Find It. Watch It. on Horror Habit's sidebar to see where else you can find this bloody hilarious television show.