This film had me at were-frog.

I turned Bad Blood: The Movie on and thought it was a good idea. It wasn't a bad idea. 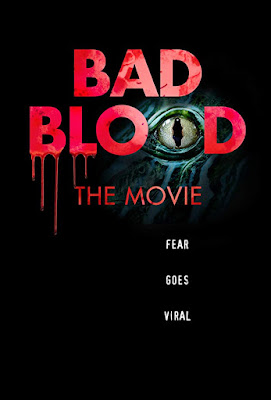 This is not a *great* film but it has something striking about it. I'm not sure if it is because it's about a woman who turns into a killer amphibious creature every full moon or that it feels as if it was created by seat of the pants ideas.

This film is engaging in that it's about WERE-FROGS. It's also striking because it's straight up weird. I was confused for a good portion of it, but that's because it moved too fast for a film about were-frogs for me. I was not prepared - but who can be prepared for this?

It parallels parent's fears about addiction too, which makes it a conversation piece and adds a new level of appreciation. Overall, it's a strange but interesting film that should probably be best appreciated alone or in a small group.

If you're in the right head space to appreciate were-frogs then ask your doctor if this film is right for you. Pairs with mixed drinks in dirty settings and food found on the floor.

I watched this film on Amazon Prime. Use the Find It. Watch It. links on Horror Habit's side bar to locate where else you can find this odd feature.