Okay, show of hands. Who has never seen Poltergeist. Come on now, don't be shy. We're all friends here... come on now. There are still so many classics I've not - HAA!

I've totally seen this film so many times! HA! But why, why has it taken you (those who raised their hands) so long to see this film? That is the big question. For shame.

In all seriousness, 21 days of horror movies I've never seen before AND so many of them being disappointing - I need some sort of respite.

I needed some sort of safe place to remind me that there are good Honest To Goodness horror movies out there. It's been a tough couple of weeks with my random picks this year...I'll just put it that way. The pickin's at the movie store are running low. I might very well run through their entire Horror section by the end of next year. It could be a painful year...

Which is why I'm turning to a trusted source. A ghostly tale that had horrified viewers for decades. A phenomenal film that has brought us nightmares to pass on to the next generation, and all the generations to come... 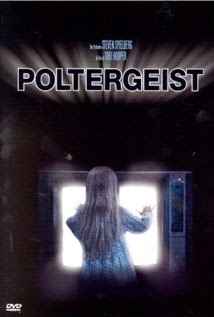 When I was renting this one from the video store today, guy behind the counter (who is not a horror movie fan, like the ladies there, I'll just add...) was like, "I guess they are making a remake of this film."

"Yeah", he said, "Let's hope the curse doesn't follow them."

But the rumor is true. There is a supposed curse on this film and the actors within. Although I am a hyper big fan of the paranormal, I do not believe in "curses".  It is tragic that some actors in the film suffered terrible, random deaths, I would not call it a curse. I would call it SUPER tragic. Straight up.

That said, history suggests that a remake of this fantastic classic film would suffer more tragedies than the original. And I'm just talking box office sale here...

The important message is that YOU, those of you who have not seen the film, get going with seeing this film as soon as possible.

It's scary, it really is. It's moving. It's touching. It's disturbing. And, being a paranormal fan, not entirely about a "poltergeist" as much as it is about Really Pissed Off Ghosts.

THIS ONE IS FUN FOR MOST EVERYONE!

Recommended pairing: family dinner, everyone is sitting around being normal. Then someone, anyone, should toss a chair across the room and turn the TV on. Scene goes from there...